To ensure the ongoing success of the program and to measure its effectiveness in serving the career development community in Nova Scotia, the NSCDA has commissioned a consultant to conduct an evaluation of the Career Development Practitioner Certification Program.

What Evaluation Will Achieve

A formative evaluation of the CDPC program will enable us to:

The Nova Scotia Career Development Association was formed in 1999 as an inclusive not- for-profit organization that provides strategic leadership to Nova Scotia professionals working in the field of career development. This is achieved through many means, including:

In 2006, the NSCDA began to explore the creation of a voluntary certification for Career Development Practitioners (CDPs) in Nova Scotia using the Canadian Standards and Guidelines for Career Development Practitioners (S&Gs) as its guiding framework. Between 2006 and 2009 a certification working group examined approaches from other provinces, then created and piloted a framework for Nova Scotia.

Recognition of Prior Learning

Through the exploratory and developmental process, it was determined that the approach to certification must recognize both formal and informal prior learning of career development practitioners rather than a review of academic credentials. In 2013, the voluntary certification process was identified as a priority in the NSCDA’s Strategic Plan and the Nova Scotia Career Development Practitioner Core Competency Profile was created as an adaptation from the national S&Gs. Testing instruments were developed based on the core competency profile. In 2014, planning for implementation of the voluntary certification program commenced.

In 2015, the Nova Scotia Government outlined a Framework for Delivery of Employment Services in Nova Scotia which prompted a reorganization of career development organizations in the province, and rebranded the organizations as “Nova Scotia Works Centres.” It became a requirement for all case management staff to obtain Career Practitioner Certification, a responsibility delegated to NSCDA. 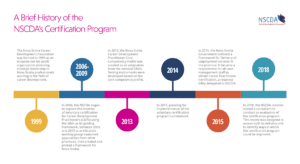 The Nova Scotia Career Development Association (NSCDA) is partnering with the Youth Initiatives division of the Department of Labour and Advanced Education on an employability skills pilot project for youth and employers. The participants are those who are involved in the Student Summer Skills Incentive program. This program offers wage assistance to non-profit organizations that provide summer jobs to post-secondary students.

The NSCDA has engaged Futureworx, using their highly successful Employability Skills Assessment Tool (ESAT), to provide employability skills training, coaching and support to  120 students in four pilot locations across the province. Students and their respective employers will receive training on employability skills with the impact of this training evaluated through employer feedback and student success by the Centre of Employment Innovation.

Four Nova Scotia Works service providers will implement the pilot during the summer of 2018: TEAM Work Cooperative (HRM), Employment Solutions (Bridgewater), Futureworx (Truro), and the YMCA of Cape Breton (Sydney). Student coordinators at each site will receive ESAT training and employability skills workshop training to support the project. Coordinators will work closely with students to help them achieve gains in employability skills while also assisting employers navigate issues such as supervision and accountability. The 12-week program will run over the summer months with a final report due in October.

On February 23, 2017, more than 80 community leaders involved in mental health and social services will gather at Pier 21 for a leadership development day centred on recovery-oriented practice. Based on a recent NSCDA needs assessment, education and training in mental health is a high priority. In response to this, 30 of these 80 participants will be Nova Scotia Works’ client-facing staff who have been identified as Mental Health Champions within their centres.

The NSCDA is embarking on an ambitious initiative to engage these Champions in developing education and training opportunities on mental health recovery-oriented practices, and has partnered with mental health consultant Neasa Martin to develop a comprehensive training program.

The objective is for every career service worker to have the knowledge and skills necessary to support clients in achieving their goals.  These volunteer Champions will also seek ways to engage community partners to strengthen employment, social inclusion, and improved access to mental health and recovery supporting services.

To meet this challenge and ensure the ongoing success of the project, the NSCDA is also joining forces with the Mental Health Commission of Canada to begin breaking through the barriers preventing career developers from recognizing their roles as important assets in recovery-oriented practice and mental health. 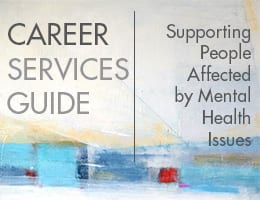